The results are in from the EBN poll on the Price-Supplier Equation. Fifty-five percent of respondents believe that the premium paid for being single sourced is greater than 10 percent, and more than half of these believe it is greater than 15 percent. This is a significant hike on cost and an unnecessary supply chain risk from single sourcing.

This level of premium is directionally consistent with what I see in Freebenchmarking.comdata. There is, in most cases, a premium. For my analysis, I calculated the fair market price (target price) for each component by client. I then calculated the percentage difference between what clients are actually paying and their target price and separated the data into two groups; the group of single-sourced components and the group of multi-sourced ones.

Finally, I compared the results by client. I took steps to remove known sole-sourced devices and used only OEM companies as I felt EMS data would distort the analysis. My results show a wide variation from company to company and from commodity to commodity but overall a 5 percent premium is the average paid for being single-sourced.

My findings are summarized in the table below: 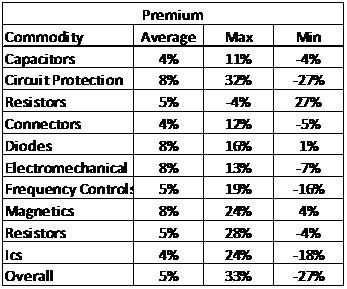 One can speculate as to the root cause of this premium but my experience biases my thinking towards the missing competitive environment when single-sourced. I have seen many instances where noteworthy cost reductions come from the existing supplier when viable alternatives are tabled. Isn’t capitalism great!

What’s also interesting is that many companies operate with unnecessary single sourced component sourcing. One would think that an average 5 percent cost premium would justify the business case for alternate sources. Again using Freebenchmarkiing.com data, it appears that an average company has 30 to 50 percent of its components sole or single sourced and typically our reports identify drops in alternatives for over 25 percent of them. My definition of single sourcing excludes weak alternate sources like 5 percent versions of components from the same manufacturer as a second source for the 10 percent device.

It’s difficult to understand why so many companies accept this higher cost and unnecessary risk.

Ken Bradley is the Chairman/CTO & founder of Lytica Inc., a provider of peer market pricing intelligence for electronic components.
Articles: 110